Skip to content
Historyadmin2021-10-04T14:08:00+02:00
The doors to Lambson’s Hire were first opened in 1980 when founder and owner, Rohan Lambson, set up shop in Orange Grove. Having experienced equipment hire in Australia through contacts at Kennards Hire and Coates Hire, he identified the need in the South African market and Lambson’s Hire has since continued to be of service over the years.

Rohan remains actively involved in the business and in 2012 proudly appointed Devin van Zyl as CEO. Devin joined Lambson’s in March 1995. He was appointed Operations Director in 2008 and Managing Director in 2010.

Lambson’s Hire was founded on the concept that the hire industry is there to provide the right machine for the job. This alleviates the burden and cost of owning and maintaining equipment whether the hirer is DIY/Bakkie Builder or larger Construction Company. The basis of equipment available has always been on the principle that if it can be carried on a one ton bakkie Lambson’s will stock it. This has further expanded and the product envelope has grown in capacity to now also having to be towed or transported by truck.

A centralised workshops consisting of a team of trained and experienced mechanics ensure all equipment is correctly serviced and maintained with full service history records in order to keep up high standards of quality and reliability. The company has an integrated and well networked software programme which enables clients to hire from and return to any branch.

Lambson’s Hire has strong roots in the South African market and will continue to be a reputable member of the economy. The needs and requirements of the industry continue to be top priority and superior customer service remains the cornerstone of the company.

Lambson’s Hire strives towards maintaining Honesty and Integrity at all times! 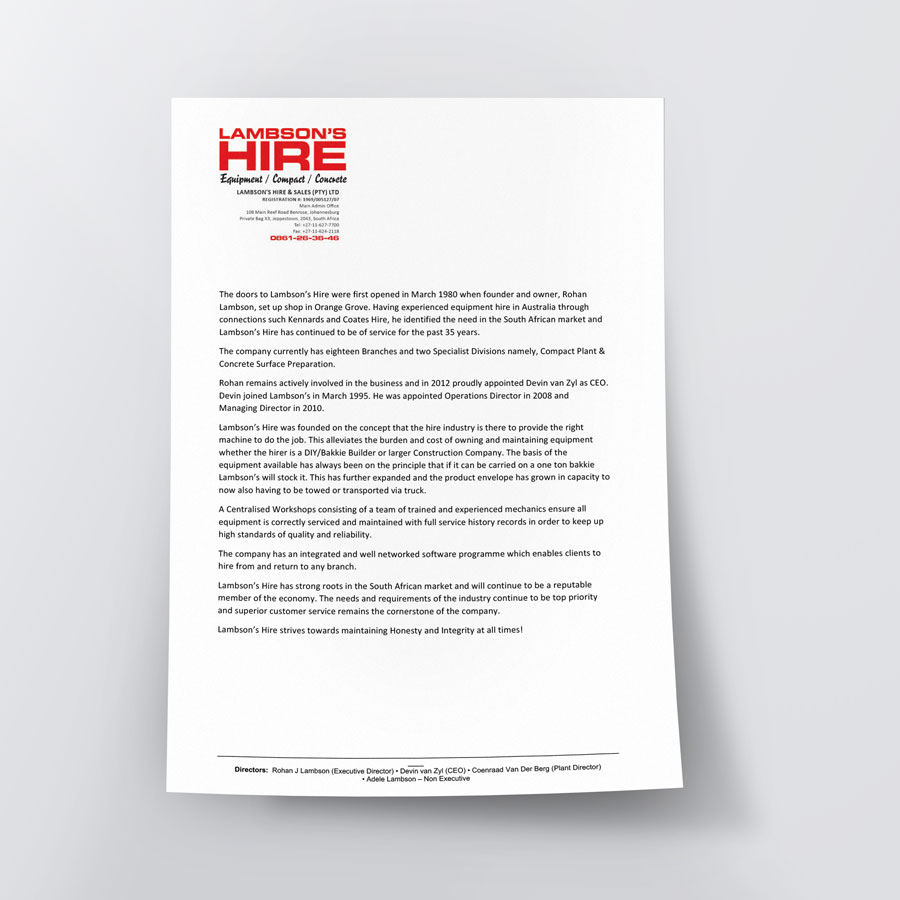